Area rugs…we all use them, in every home and style. We see countless options online and in stores and wonder “What’s the difference? Why are some so inexpensive and others thousands of dollars? What am I paying for?” Glad you asked…you’re not the first! Many rugs are machine woven, perfect in design from one rug to the next. Some are printed on the very end of the fiber keeping costs low and affordable. And then there’s the hand-knotted market. A totally different construction all together. There’s still different grades of construction and costs…and THIS is where we will take a little expedition and explore the knots of the Oriental Rug world. One small disclaimer…I could write a book on this subject so please understand that this is just a glimpse of the information available concerning the rug market. With that said, let’s discover the world of rugs!

Let’s take some time to chat about the history of rugs and weaving; one of the most ancient crafts in the world, passed on from generation to generation and was considered the most valued heirloom. The oldest rug, found in the mountains of Siberia, was crafted about 2500 BC. The advanced techniques, however, suggest that the art of carpet weaving dates back to over 4000 years! Google Altai Rug, also known as the Pazyryk Rug, which hangs on display in the Hermitage Museum in Leningrad, Russia…bordering where? China & Kazakhstan! You see, hand woven rugs were most often named after the town, village or tribe they were crafted in. Each region had its own distinguishable designs and use of color depending on the vegetation and natural dyes available in that region. 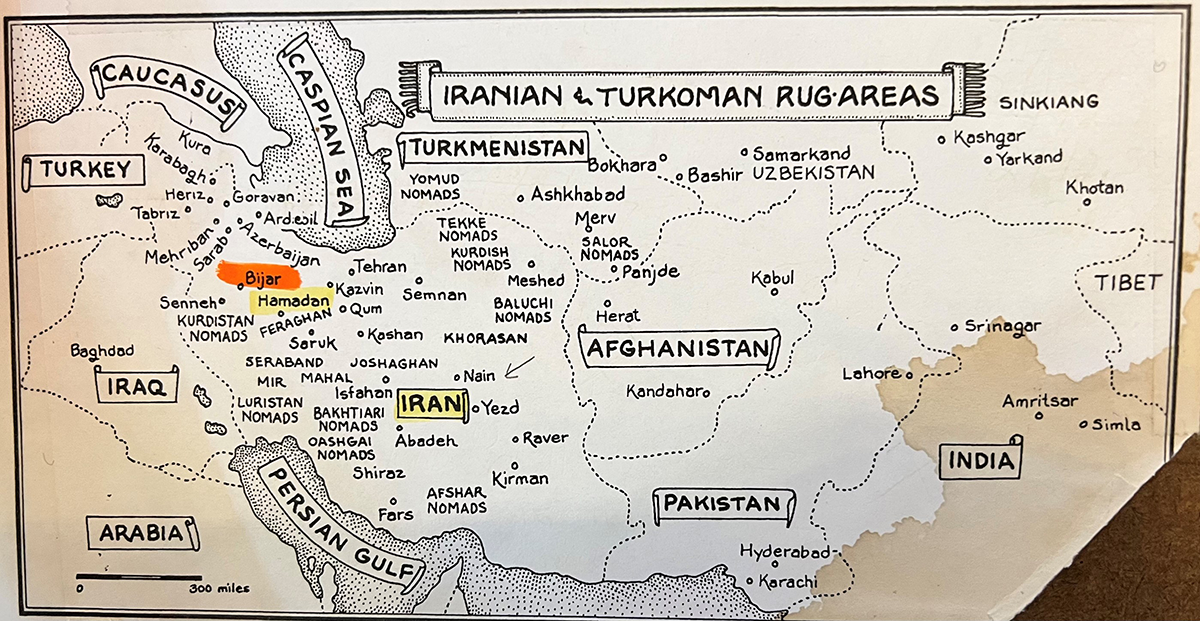 The term “Hand Woven” in today’s market can be used like Kleenex for facial tissue. When deciding to invest (yes, a genuine oriental will appreciate in value) in a truly hand knotted piece, insist every piece be entirely handmade! It’s ONLY the handmade Orientals that appreciate in value and outlast their machine made counterparts by 50 years or more! Talk about an investment! An accurate test of hand knotted is to turn your carpet upside down and look at the back. The knots will be tied around the warp threads (those running top to bottom of the rug) and these threads should NOT be seen. You should see the same pattern on the back as you do on the front. Another test is to bend the front side of the carpet back on itself and expose the roots of the pile. Can you see rows of knots at the base of the tufts? A true indication of hand knotted. Or do you see a loop which may be easily pulled out with tweezers? Yup, that’s a machine made rug!..BIG difference in quality, value, longevity and price! 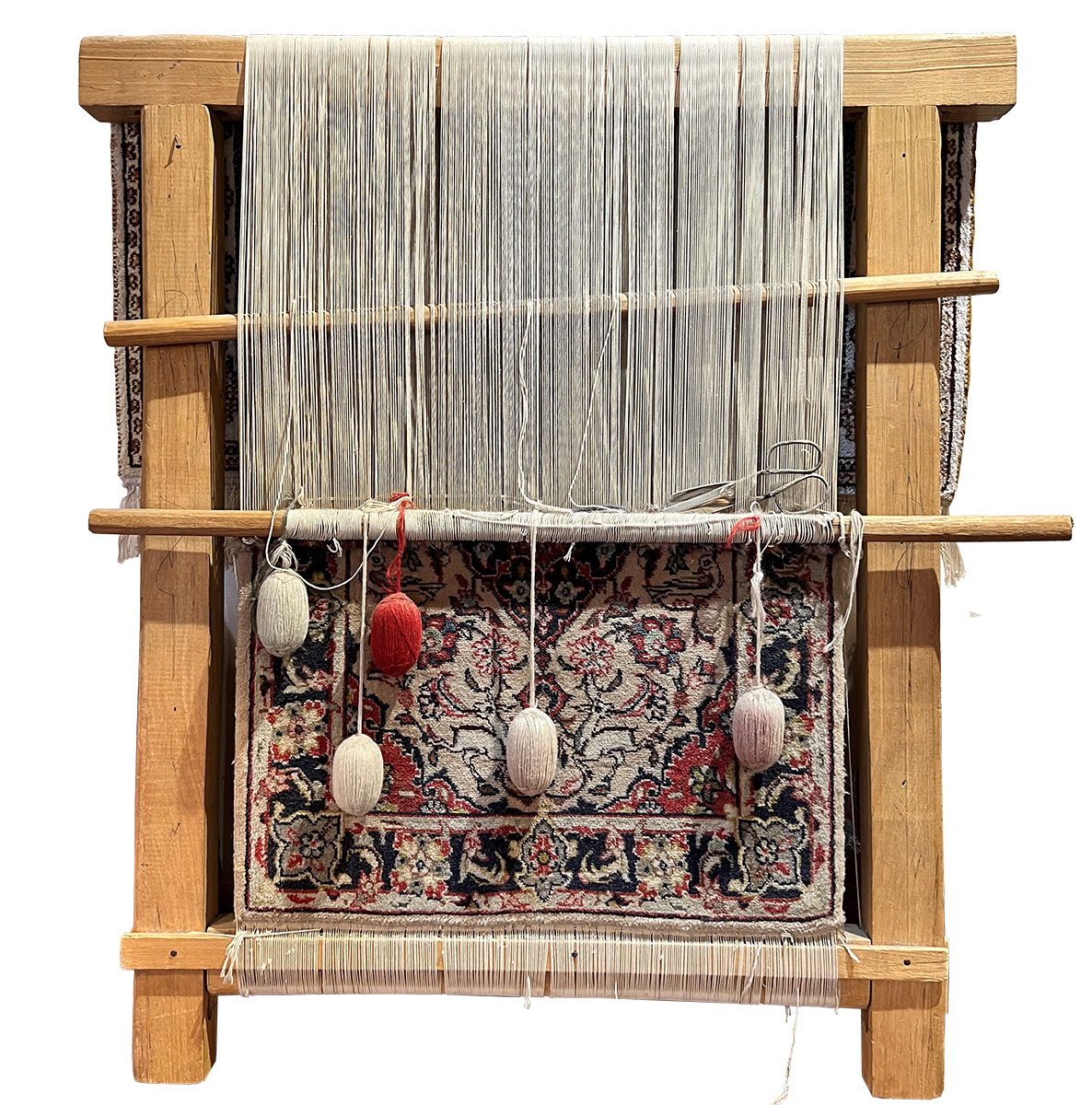 While I’m on the subject of hand knotted, lets discover the difference between a Persian Knot (Senneh knot) and Turkish Knot (Ghiordes knot). Turkish knots are used in rugs made in northwestern Iran, Kurdistan, Azerbaijan, and Turkey. The knot is strong due to its double loop and results in a very consistent pile, therefore used in rugs with a thicker pile. Persian knots are used mostly in rugs from eastern Iran, Pakistan, and India. This knot is asymmetrical with one half tied tightly around a warp with the other half left loose, allowing the knots to be packed tighter than the Turkish variety. These knots produce a dense rug with extremely detailed patterns. Still, yet another quality is the dye. Hand woven rugs are also hand dyed. Originally, all dyes were fashioned exclusively from animal or vegetable elements such as blues from the indigo plant or yellows form the saffron corocus. By the 1860s, aniline dye was developed and used readily in Turkey and Persia. However, the color faded soon after the rug was taken off the loom. By 1903, aniline was outlawed by Persia with stiff penalties but its use was continued in surrounding countries. Then by 1930, synthetic dyes (chromatic dyes) were developed proving to be more permanent than vegetable dyes and equally as beautiful with an expanded range of colors. Most Orientals are now made with a combination of both. A hand dye is recognized by the irregular color in the weave, making each rug unique.

Lastly, the knot count has a direct proportion to the quality and value of the carpet.  If you turn a carpet over, you’ll see the difference between 100 knots per square inch up to 1200. 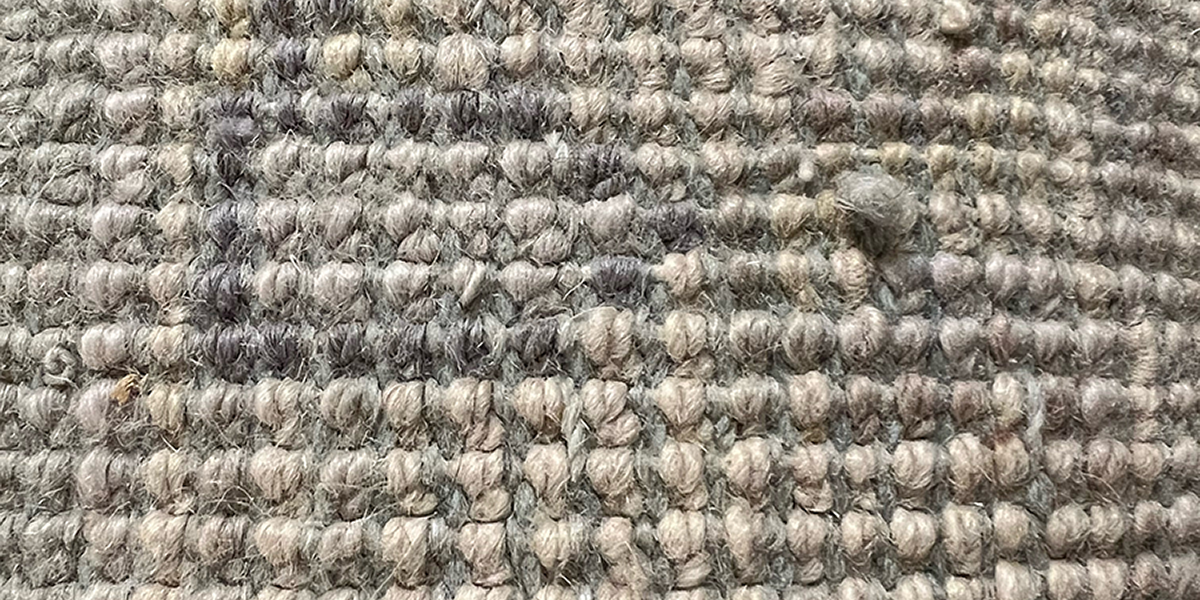 Just as reference, a single 8x10 Kazak rug requires 9,216,000 knots or 12,288 hours of labor (4.2 years) for one weaver to complete... now you understand why these beautiful rugs are more expensive than a machine look-alike! 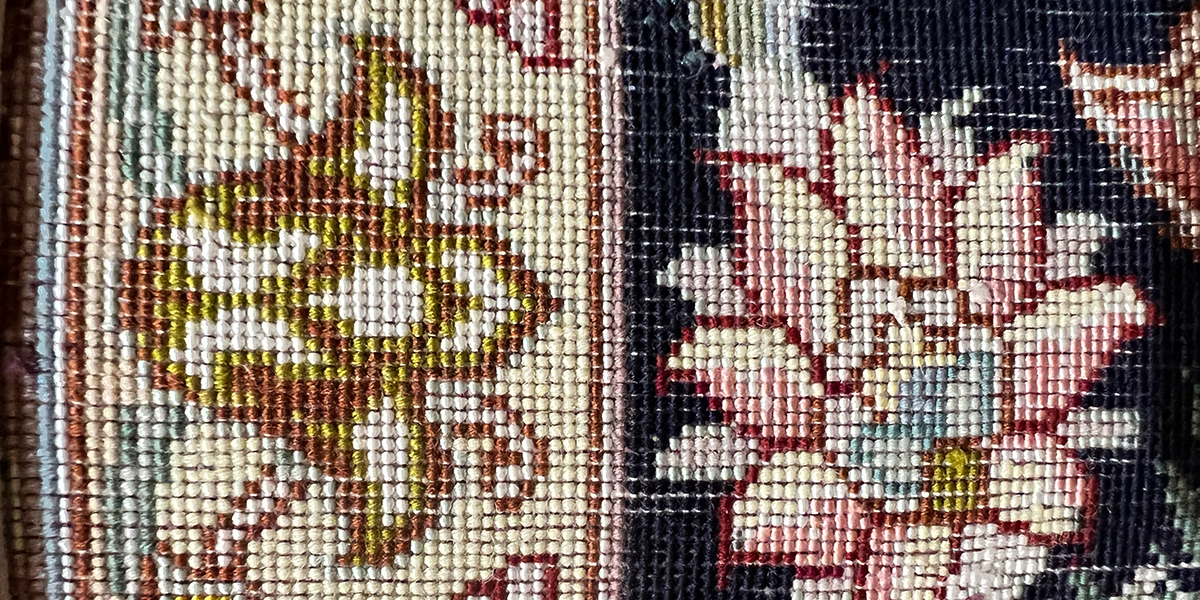 To have a better understanding of different rug designs, let’s explore four of the more common types you’ll see in American shops. Starting with the Kazak, these rugs were originally made in the Caucus during the 1800s. These rugs are now hand crafted by the weavers in Pakistan. The most recognizable motif is the medallion with other geometric elements. Also found are depictions of animals, birds, trees and humans. The boarders may include a pattern called the “running dog” (similar to the Greek key). Looking more closely, you’ll note the use of only straight lines to produce these motifs. These rugs use a Turkish knot on wool warps with the pile cut short after being removed from the loom. The color palette of reds, indigo and ivories are staples with an accent of teal creating a casual warm appearance. This particular rug is quite easily incorporated into most homes, adding sophistication, color, pattern and a lifetime of wearability.

Serapi, which originated in the village of Serab (southeast of Turkey), are now crafted in Northwest Iran. The main characteristic is a central medallion in blue or blue and ivory on a field of deep red or terracotta. The medallion typically emits a jutting branch finishing in large palmettes or leaves. The boarder is noted as featuring the “turtle” vinescroll pattern. Serapi rugs are always constructed on a cotton warp and cotton weft, which is sometime dyed. Typically, a Turkish knot is used. The Serapi rug is noted as being crafted by wives and daughters of shepards with the designs being woven by eye alone rather than the exactness of more urban weavers. This natural construction is noted as being more sought after in the American market, increasing the value of the Serapi rug.

A third category of rug is the Tabriz, from the city of Tabriz, the capital of East Azarbaijan Province in north west of Iran. It is one of the oldest rug weaving centers and produces a wide array of carpets. The Tabriz is the most diverse of designs with medallions, Herati (“fish”), to figural, pictorial, and even 3-d shaped rugs. The pile is trimmed short with a high precision of the Turkish knots on wool or cotton warp and weft. Silk is used in higher end rugs.  It’s known for its wide variety of refined colors such as ivory, copper tones, terracotta, burgundy, Navy and baby blue, salmon, gold, tan and green may be used to accent the main colors with an eye-catching effect. Lastly, the Oushak rug is a Turkish design after the city of Usak, just south of Istanbul, Turkey which was a major center of rug production from the early days of the Ottoman Empire into the early 20th century. The highly recognizable star and medallion motifs originated from the Oushak rugs during the 15th and 16th centuries and considered to be masterpieces of the highest quality of Turkish rugs. In Europe, Oushak rugs were dubbed “Lotto” or Holbein” carpets as they were depicted in Renaissance paintings by these artists suggesting wealth, largely adorning cathedrals and the homes of the rich and powerful. Less complicated in construction, these rugs use a singular Turkish knot but are highly decorative and made from wool on a cotton foundation. The dyes used to craft these very luminous wool rugs feature cinnamons, terracotta tints, gold, blues, greens, ivory, saffron and grays. The motifs most often noted are geometric of a prayer niche design with scattered sprays of vine scroll and palmettes or leaves. Most Turks are Muslim thus observing the exclusion to include images of people or animals in their craft. Oushak rugs are still today considered nothing less than sophisticated. Oh, how I could go on...oriental rugs are a magnificent investment and not to be taken lightly when purchasing. For more expert advise and best quality, I recommend you stop at Jacobsen Rugs on Broadway in the old firehouse and chat with Frank. His knowledge of the oriental rug market far surpasses any article I could ever write and his inventory is endless. You’ll fall in love with hand knotted carpets once you take the time to truly see their beauty, durability and quality…it’s KNOT a hard choice!!