However, it was not always so...

Hidden beneath the contemporary vision of the Park is a long and varied history. That history reflects a local version of the experiences of many communities in the early days of our nation, influenced by one unique feature of the landscape – the springs. 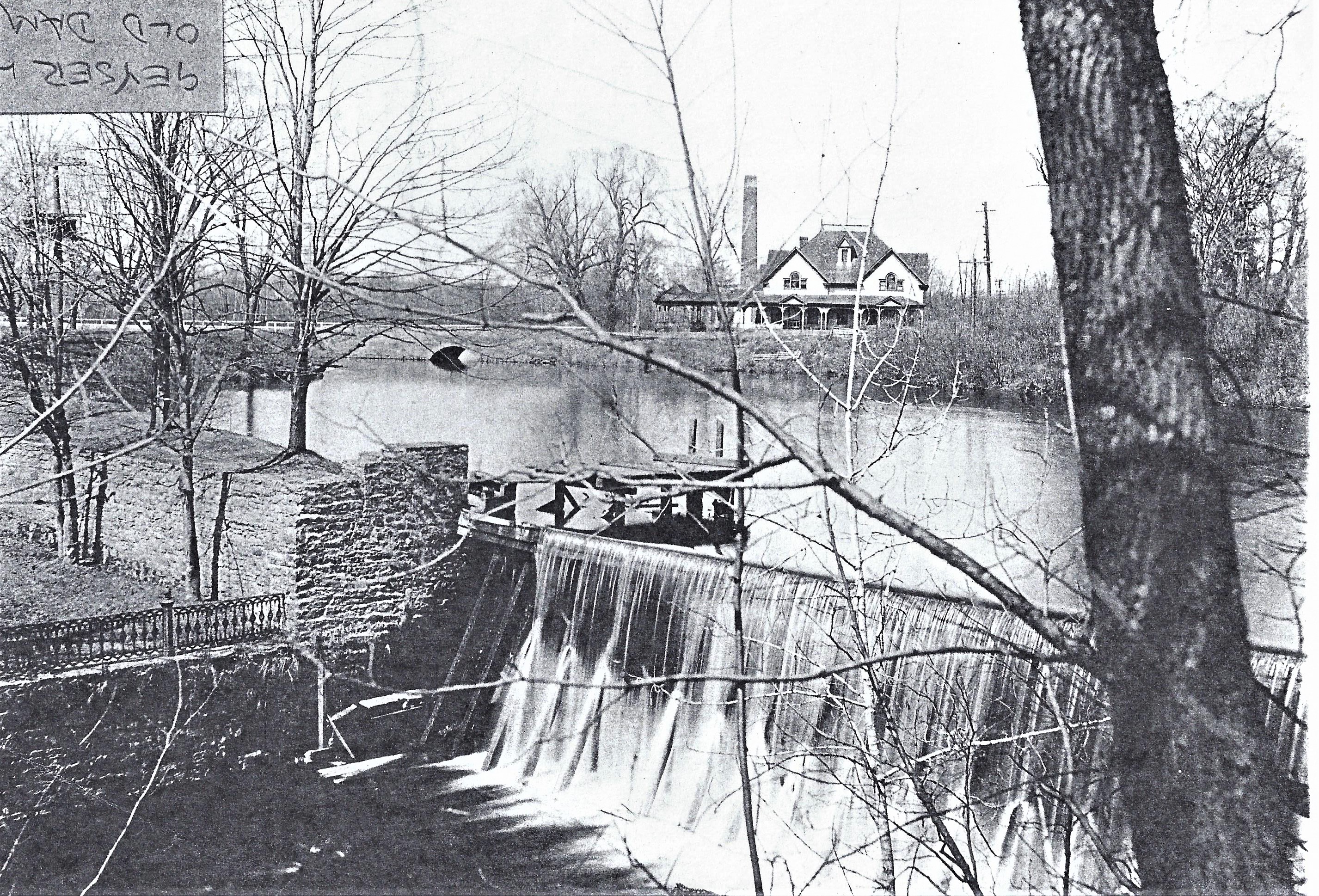 European settlement of the area began in earnest in 1792 when Robert Ellis, Sr. purchased and developed a 600-acre parcel of land in the 16th allotment of the Kayderosseras Patent, today extending from South Road in the park northward to West Avenue. Ellis, with a keen eye for property, recognized that his purchase was prime real estate for two of the most significant economic activities in early rural America; farming and milling. Ignoring the mineral springs oozing out of the ground, Ellis concentrated on developing a large farm and supplementing his income by constructing a dam and a sawmill. After 220 years, the modern version of the dam remains in the same location holding back the waters of Geyser Creek. The sawmill has long since disappeared.

Adjacent to the sawmill, Ellis’ son-in-law George Peck developed a small scythe factory powered by a trip hammer around 1801, which he operated until his death in 1838.  Several hundred yards downstream at another mill seat, Robert Ellis, Jr. constructed a gristmill in 1818 located where the creek today emerges from the old railroad stone culvert. That mill continued to operate throughout the 19th century, later owned by David Gibbs and his son William, who sold the flour produced there at their store in Saratoga Springs. 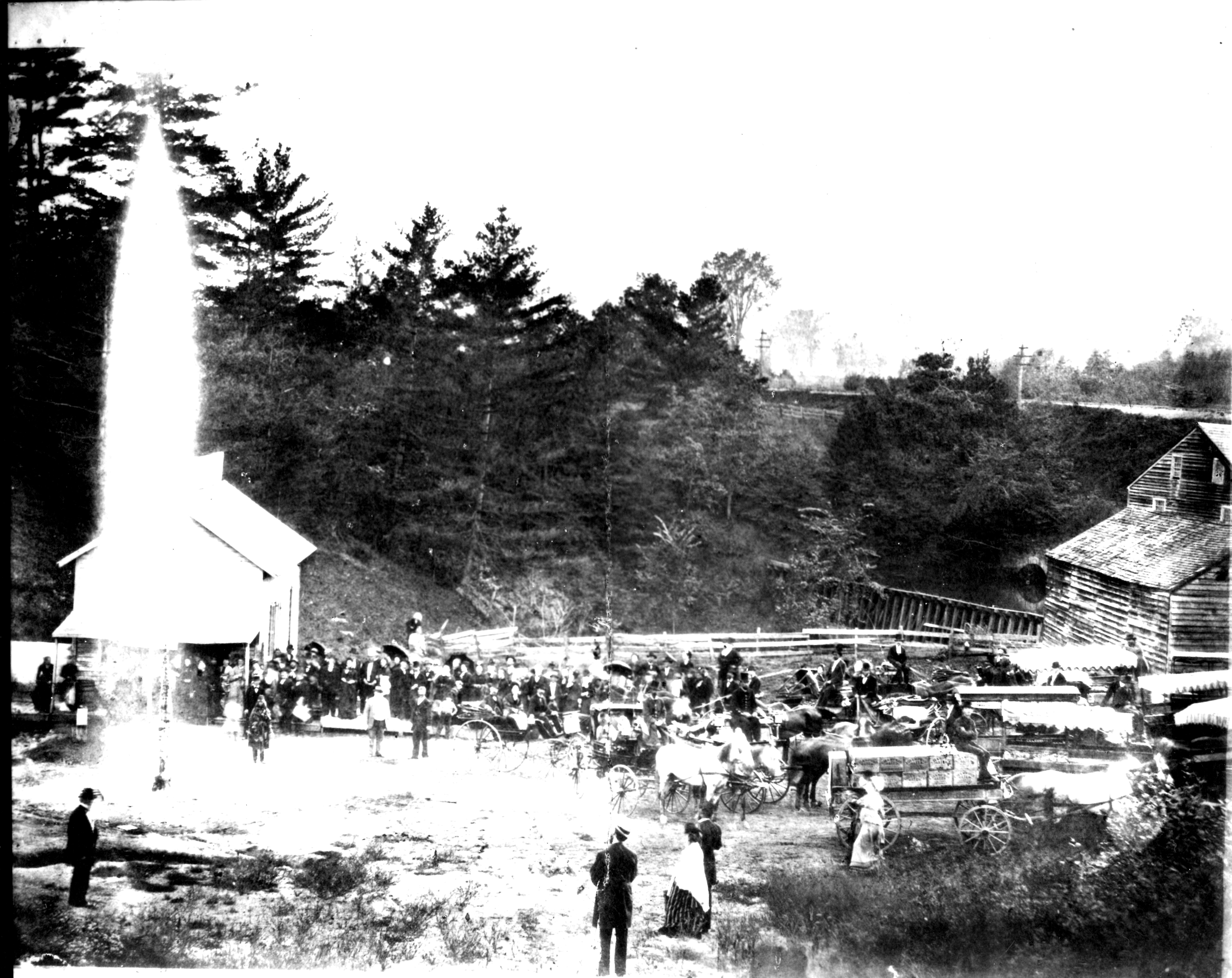 These businesses were typical of early industrial pursuits in ante-bellum America – small scale operations with few employees, selling most of their products to the local market. During this period another small factory was established by Willis Hurlburt, who arrived from Litchfield, Connecticut in 1841. Initially taking over George Peck’s scythe business, in the 1850s Hurlburt converted the facility to a small nut and bolt factory, still employing only a few workers.

The Civil War changed all that, and Hulbert recognized the opportunity to expand to meet the demands of the war effort. However, to do that he needed partners with money. He found them in two local entrepreneurs, Arthur Dodge Seavey and Deman Vail. Seavey, born in Maine, and Vail, a lifelong Saratoga resident, made their fortune during the California gold rush, not by mining, but by selling merchandise to the eager prospectors. Together in 1862, they purchased a two-thirds share of Hurlbert’s small factory for $12,000, which was immediately invested in expanding the business; constructing a large factory building on the site of the old scythe mill. By 1866 the factory employed fifty men producing 20,000 finished nuts and bolts per day. 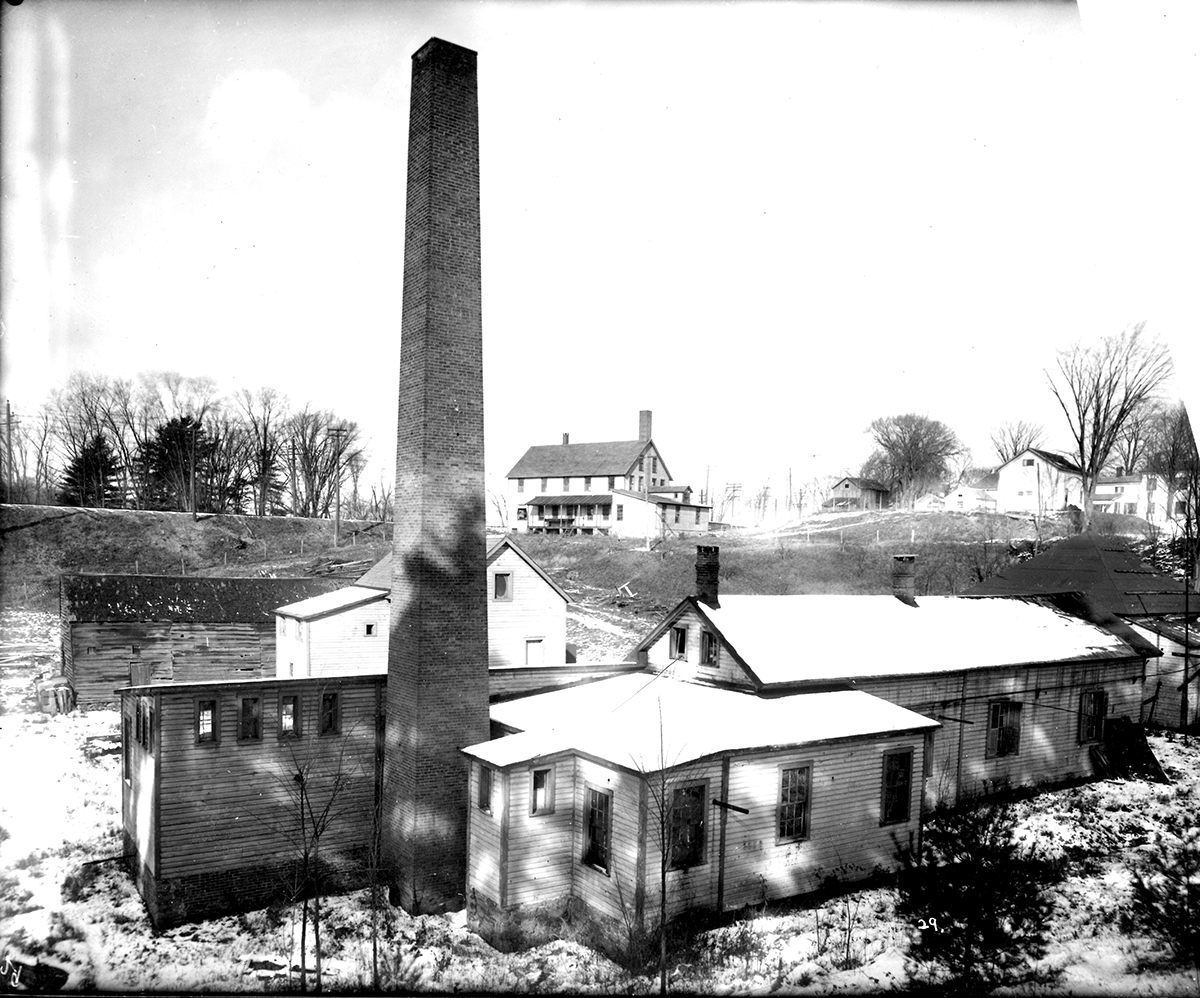 However, business declined in the post-civil war years, and in February 1870 the trio turned to Jessie Button who was well known for his skills in drilling deep wells in the area. The partners, aware of the untapped potential of the springs along the creek, retained Button who struck a large vein of mineral water at a depth of 180 feet.

Almost overnight, the future of Robert Ellis’ 1792 land purchase was forever changed. Within a month the mineral water was spouting upwards to a height of 20 feet, immediately drawing large numbers of curiosity seekers from Saratoga Springs, two miles to the north.  The three men lost no time in promoting both the curiosity of the spouting spring and the water itself, bottling and marketing it under the names of “Geyser Spring” and “Geyser Water.” Manufacturing of nuts and bolts were now a thing of the past, the factory building signage now proudly trumpeting its new mission. Other springs appeared, drilled by Button.  One of the most famous, the Champion Spouting Spring, was located on the property of Gibbs’ gristmill on the grounds of today’s Saratoga Performing Arts Center, entertaining travelers on the railroad as they passed by. 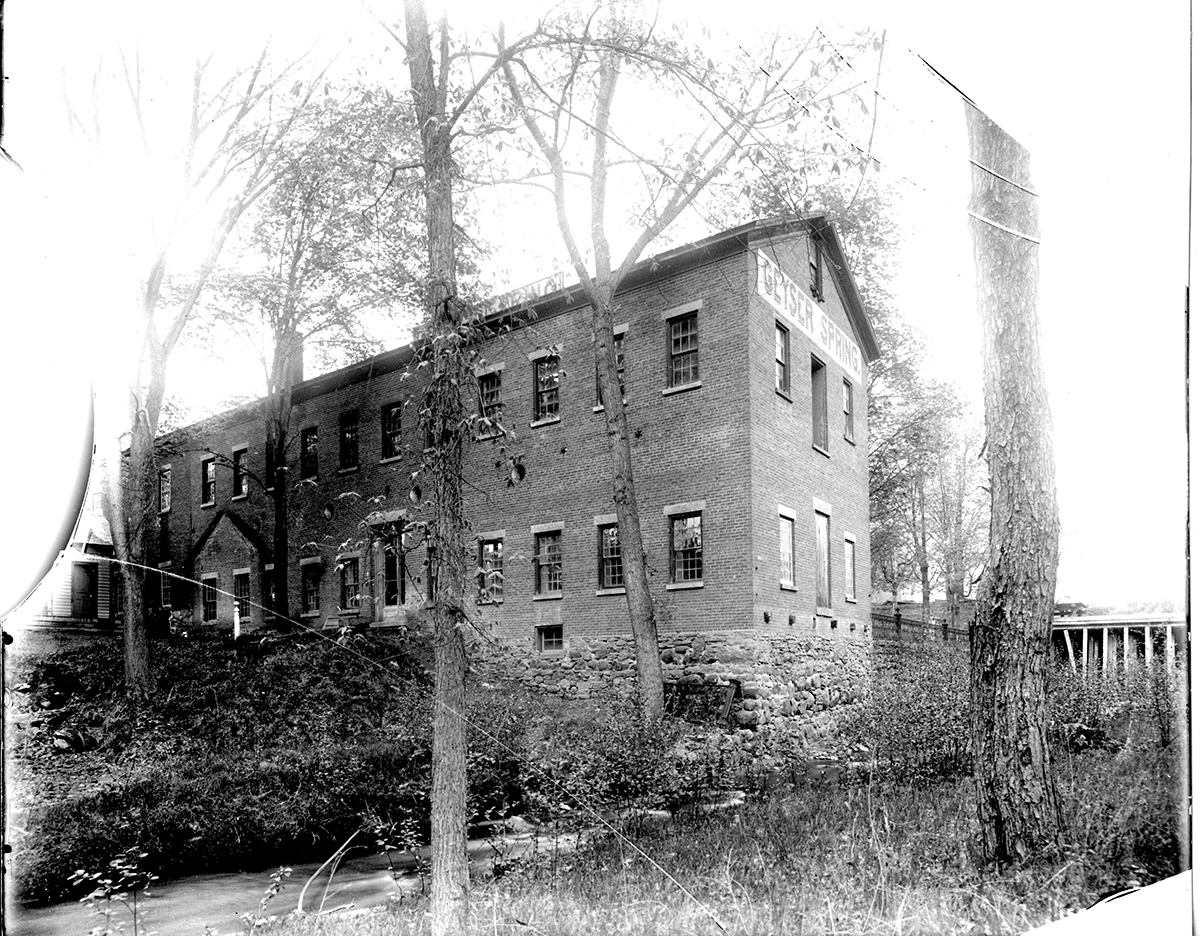 New ventures require new investments, and in 1872, George Batcheller and Jacob Adams invested in Geyser Springs, eventually purchasing the business outright. For Batcheller, Civil War officer and son-in-law of prominent Ballston banker James Cook, 1872 was a busy year. In addition to his interest in Geyser Springs, he was immersed in the construction of his mansion on Circular Street in the resort village. But it was Adams, who soon bought out Batcheller, and whose vision resulted in the expansion of Geyser Springs into Geyser Park. Images show the idyllic paths and landscape of the park, with rustic bridges crisscrossing Geyser Creek and its tributaries. Successful for a time, Adams eventually faced financial difficulties and during the 1880s the park declined.

The twenty-year focus on springs and parks for tourists was soon followed by a twenty-year period of exploitation.  It began with the discovery that Carbonic Acid Gas could be extracted from the springs, captured in steel tubes and sold to create carbonated water for the growing beverage market. The process was perfected by Jules Formel, a native of Cuba and a graduate of the New York College of Pharmacy. He and two other New York City businessmen, John Minor and Harry Pettee, seized the opportunity to convert Saratoga’s springs in a financial bonanza. 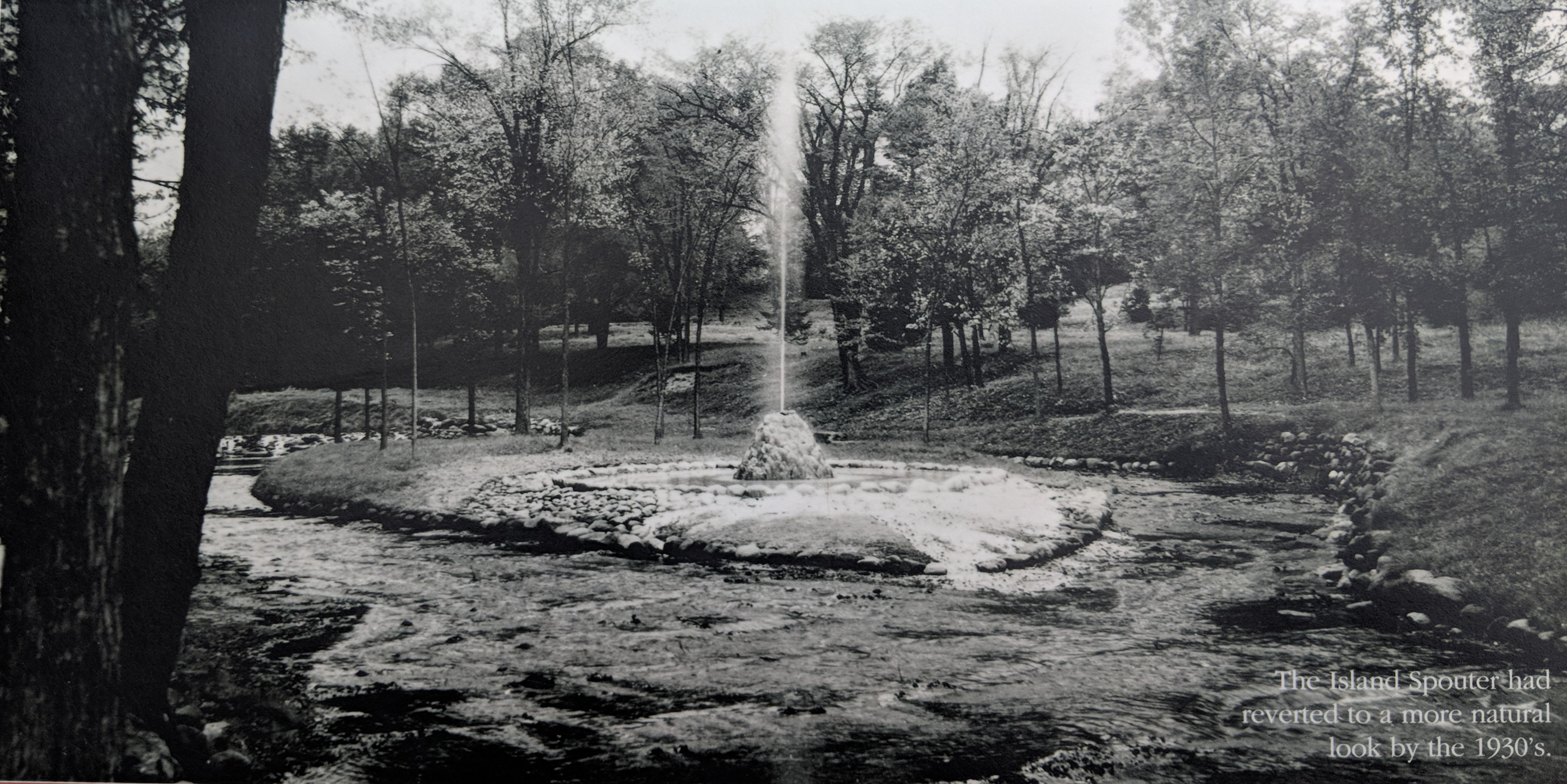 Sometimes working together and sometimes operating independently, beginning in 1889 they purchased much of the land along Geyser Creek from willing local landowners, and during the 1890s formed several Carbonic Acid Gas companies. From a modest beginning, these companies aggressively increased production through excessive pumping practices based on a process developed by Minor. The process resulted in such a large extraction of water that all the area springs experienced a decline in flow.

After a successful 1907 court case involving Frank Hathorn’s spring in downtown Saratoga, a Committee of Concerned Citizens, led by Spenser Trask, owner of the Yaddo Estate, lobbied for an anti-pumping law that was passed by the State Legislature the following year. The gas companies refused to suspend their pumping activities, and sued the State, seeking to overturn the law. Faced with a long court battle, the State stepped in, forming the State Reservation with the authority to buy up the gas companies’ property, halt the pumping and restore the springs to their natural state.  The Reservation was also given the task of recreating the park around the restored springs, the first step in the development of the Saratoga Spa State Park we enjoy today.