Saratoga Springs, with its unique location, flowing waters, and the summer horse racing spectacle, attracted many who created homes and gardens to be admired. One unique public house offered a beer garden, on the east side of Broadway, directly opposite the intersection of Division Street.

This site was also directly across the Broadway thoroughfare from the legendary United States Hotel and Worden House, and known as the Hotel Todd. This establishment would be easily spotted by those seeking the spirit of Gambrinus to slake their thirst, after arriving in the Spa City at the nearby D&H train station.

The 398 Broadway location had previously been operated as the Hotel Voullieme until the famous brewer David G. Yuengling, Jr. gained possession. He formed a consortium in 1887 with the Honorable Hiram Todd, a former Saratoga Springs attorney, and his son V.L. Todd to operate a public house which included both a cigar store and a liquor outlet. The opening was announced in the Saratogian, which wrote,

“V.L. Todd, the new occupant of the Yuengling building, on Broadway, will serve clam chowder at his cigar and refreshment headquarters this evening.” 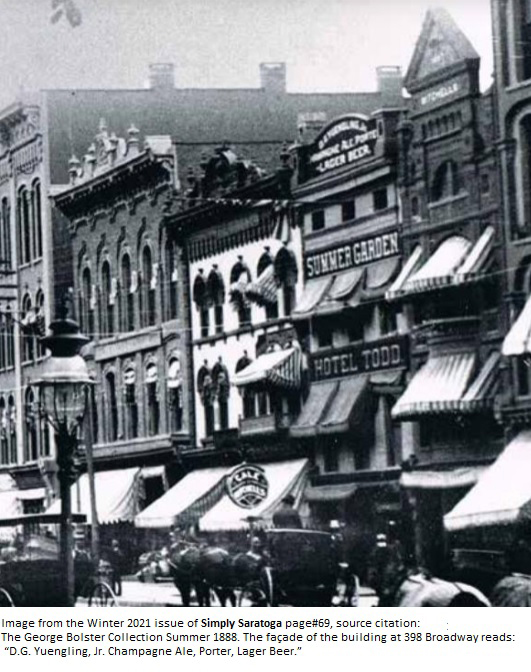 Many later historians conjectured this operation, as well as Caleb Mitchell’s establishment next door, also conducted back-room games of chance. Illicit, yet much sought after entertainment of the time.

The main attraction at the Hotel Todd was the summer garden where noted singers provided entertainment in the fashion of a nightclub to the dining patrons. The New York Times wrote in 1888,

“the only drinking place in town with a summer garden attachment. . .the Hotel Todd is principally patronized by race-horse people, men of sporting proclivities, and politicians. They are all men of means, and it is not a place for 'cheap' people. There are 16 rooms in the hotel. The Summer Garden is very prettily arranged, having a huge fountain in its centre. The walls and ceiling are decorated in Japanese fashion. In this garden ladies and gentlemen may drink beer on draught or any of the fancy Summer drinks, and have a cold lunch at any time of the day or night. There are hundreds of places where all this may be obtained in New York, but this is the only place in Saratoga of the kind.”

The garden delivered a delight for many of the senses.

D.G. Yuengling Jr.’s father, who spelled his name Jüngling in the old country, had numerous older siblings, necessitating relocation to strike out on his own. He brought his old world brewing skills from Germany to America in 1828 and established several breweries, the largest being in New York City, at the intersection of Amsterdam Avenue and 128th Street. This Manhattan location, very near the piers of the Hudson, or North River, brewed the lager beer, ale and porter and was supplied from an artesian well on site. Prior to electrification, Gotham received much of its ice for refrigeration from upstate lakes and ponds, shipped by canal boats. It is likely the barrels of Yuengling Beer were ‘back-hauled’ to the Schuylerville docks on the Champlain Canal, and onto Saratoga Springs for bottling and distribution. 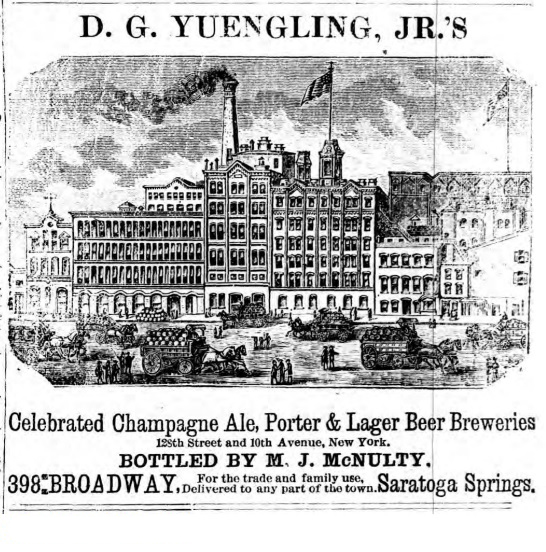 Upstate New York saw many of David G. Yuengling, Jr.’s enterprises, as he built a recreation home and development on Brant Lake in northern Warren County, was involved in horse sports, and also operated the Hotel Germania on Mitchell Ave, present day site of the parking lot for the National Museum of Racing and Hall of Fame. Those who knew Yuengling well found him good natured and humorous, fondly calling him Rex, and were his guests at lavish entertainments he staged in Saratoga, where his libations flowed liberally. His wife and daughter were frequently reported by the local daily where their fashion of dress was admired. His son Fred, however, had been more than a bit of a troublemaker on three continents, and cause for financial woes. D.G. Yuengling Jr. sought financial relief from a fellow brewer, who also happened to be an uncle, John F. Betz. When Yuengling’s obligations could not be met his uncle foreclosed, and this also lead to the change in possession of his upstate properties. 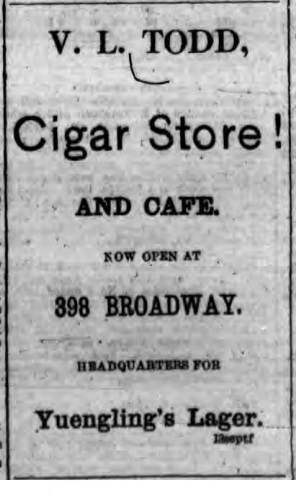 The beer distributor operating at the Hotel Todd switched to Beverwyck Ale brewed in Albany, and the management of the facility and the popular Summer Garden transferred to the Kirkpatrick Family. By 1900 the operation at 398 Broadway had become known as Hotel Beverwyck. Many years later, in 1957, this location was one of eight businesses destroyed by fire in Saratoga Springs early on a Sunday morning. Unfortunately, Saratoga Police officer Fred E. Pettit, who was attempting to rouse residents of the upper stories, was killed when a section of brick wall collapsed. Ruined in the fire were E.D. Starbuck, F.W. Woolworth, Saratoga Men’s Shop, Saratoga Appliance, Mac Finn Drugs, Palace Recreation, Endicott-Johnson Shoes and Liggett Drugs. Water damaged other shops and several law firms were also marred.

Historic artifacts remaining from this period are presently sought after by bottle collectors. The embossed glass identifies the Yuengling product as being bottled in Saratoga Springs, and the transparent vessel is heavy with a strong neck.  The champagne ale bottles required even more strength, as the beverage was finished in the same methods as Champagne, yielding a highly carbonated brew.  Interestingly, the former Yuengling brewery’s Manhattan location was closed following the Prohibition of alcohol sales by the eighteenth amendment in 1919, and its refrigeration rooms were converted into a storage house for fur coats and wraps. This structure has only recently been repurposed again, as a mixed use office and residential complex known as the Mink Building. 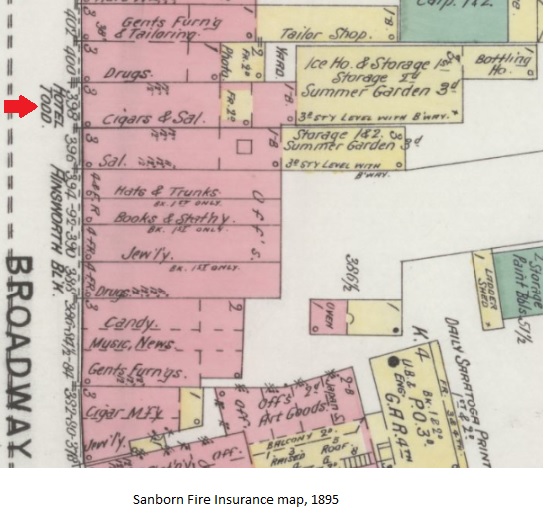 The spirit of the unique Summer Garden at Hotel Todd lives on in so many of the present day establishments of Saratoga Springs, which perform at an excellent level of entertainment, fare and drink, many also providing accommodations of the best kind. Several of these public houses offer gardens, or adjoining outdoor patios to enhance the enjoyment of their products. It is a pleasure to find and sample these offerings of the Spa City, some of which still serve that liquid link to the past, Yuengling Beer. 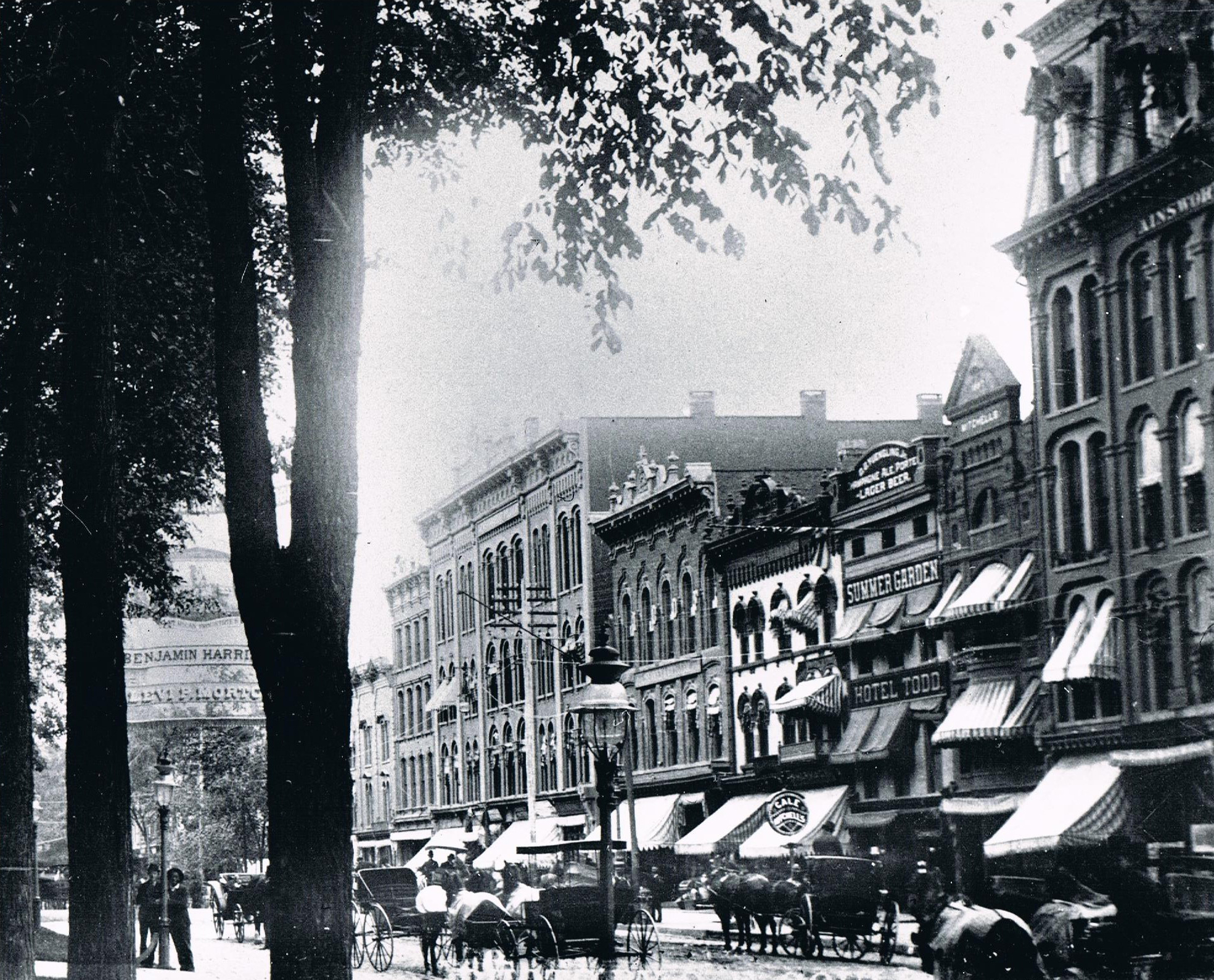