I truly believe that the best way to create a warm, inviting home that is uniquely yours, is to surround yourself with collected pieces and things you love that have special meaning. I think it’s so beautiful when you can walk through your home smiling as you show your guests around, pointing to things saying things like we got that on a special trip we took, my son made that for me or that vanity belonged to my grandmother.

Or my father found this butcher block in his friend’s barn. It was actually used what it was created for and was a mess when he brought it to me. He knew I would love it and make it beautiful again. We’ve had it for over 20 years… 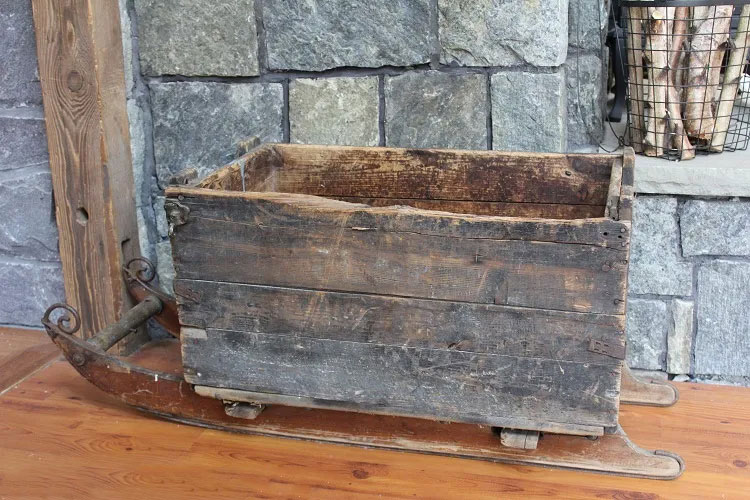 One of my favorite pieces is this sled. My husband and I stopped into one of the very cute little antique shops in Ballston Spa. I wasn’t really looking for anything specifically, but was instead, hoping for something to speak to me. As we walked through one store, I spotted a really unique old sled. It was very beat up but nothing I had ever seen before. It had a box on the back and curly rod iron rails on the front. I stopped and looked and said to my husband “what do you think of this?” His response was “what are you going to do with that?”

“I don’t know but it’s really cool. It will look so beautiful at Christmas by the tree.” He replied “But what will do you do with it the rest of the year?” He continued walking.

I didn’t have an answer for that so I hesitated for a moment and then we went on our merry way. I thought about nothing but that sled for the next FOUR days!

Finally, I had enough, and decided I would buy it. I called the shop and asked if it was there. I waited while the person on the phone went and checked. She came back a moment later. “Do you mean the sled with the box on the top?”

Disappointed, I called my husband all full of regret and sadness and told him. I should have bought it I said! I’m so mad at myself.

He said there would be other sleds. Maybe, but not like that one.

I know what you are thinking here. Seriously?? It’s just a sled and in the grand scheme of things is it that big of a deal? You are absolutely right, it’s not.

My husband knows me so well. I never really ask for anything or complain so when I got upset, he knew I was disappointed. He called me later and asked if I was still mad. I told him yes and before I could say anything else he said “Col, it was me. It was me who bought the sled. I bought it for you for Valentine’s Day.”

He is beyond thoughtful. I love it and now I love the story it comes with and every time I look at that sled, I will think of our day shopping together and hear his voice say “Col, it was me.”

That is what a home is made of. Not the things, but the memories, the special meaning they have and the joy the story brings.

Here’s to a wonderful holiday season making beautiful memories and filling your home with happiness.